Perhaps the only people who don’t know about my current pash on air fryers, are the Martians whom NASA’s Perseverance rover is looking for. If any Martians intercept Keeping in Touch, and wonder what an air fryer is, it’s a sort of egg-looking thing, the size of a large food mixer, which whirls hot air around food in a basket to cook it. And crisp it. And make it yummy. But I digress.

I’ve wanted one for a couple of years, but sensible Leisa said

1 We haven’t got room on the kitchen bench, and

2 It doesn’t do anything which an oven can’t do.

So far as (2) is concerned, frozen chips, and frozen battered fish and chips, didn’t change her mind. But wait: a pork roast came out exactly right, with crackling to die for. As did salmon fillets with asparagus. No conventional oven competes. This morning, cheese and ham toasties beat anything which a sandwich press could produce. As for (1), we find intermittent room on the kitchen bench, so long as I hide the device in the ballroom between cooking gigs. 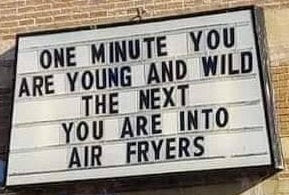 You see, it took tasting to bring Leisa round.

King David (he wasn’t king at this point) ran away from Saul (who was king) in fear of his life. But in a classic case of out of the frying pan (unintended cooking pun) into the fire, he escaped to Achish, king of Philistine Gath, only to have Achish’s staff shop him, and had to flee from Achish in turn by feigning madness (1 Samuel 21).

That episode spurred Psalm 34. David attributed his rescue from first, Saul, then Achish, to

“This poor man called, and the Lord heard him;

he saved him out of all his troubles.
The angel of the Lord encamps around those who fear him,
and he delivers them.”

Er, what’s this got to do with air fryers?

“Taste and see that the Lord is good;
blessed is the one who takes refuge in him”.

In my long, mixed up, incident-laden life, how do I know that the Lord is good?

Popular posts from this blog

06 May
So, I endured periodontal torture this week, when half of my gum line was prodded and scraped at to try to ensure that my teeth stay anchored to my gums for the foreseeable future (which, at my age, might be all of my future before the Lord comes or takes me). The other half will be tortured in a couple of weeks or so. Custom has it that I weave this personal anecdote into a Ramble. OK, what does the bible have to say about teeth? Much is concerned with words dear to the hearts of those who think that the Gospel is about damning >99% of people for whom Christ died, to eternal damnation. Gnashing of teeth, and all that. But I go for the many instances in Song of Songs, eg ch6, “ Your  teeth  are like a flock of sheep coming up from the washing. Each has its twin, not one of them is missing.”  An almost identical phrase precedes it in ch4, both of them following an early chat-up line of mine to Leisa, “Your hair is as a flock of goats, cavorting down Mt Gilead”. You should have seen
Read more

Ramble for Kirwan Uniting Church Keeping in Touch newsletter May 22 2022.

20 May
At Synod last weekend, I did something which I’ve never done before. (No, not annoyed the ecclesiocracy, I’ve done that before, Sheree confiscated my blue voting card this time to keep me out of trouble.) I ordered food online to be delivered to Alex Park (the Synod venue). Many of you will be old hands at this lark, but it was a novelty for me. You sign up to the delivery service, UberEats, Deliveroo, Doordash (I used Doordash), whoever, their app knows where you are from your phone or iPad’s GPS location server, and you are presented with the menus of nearby eateries, accompanied by tempting photos of pizza, curry, kebab, fish n’chips. I plumped for a boring Subway sandwich because I didn’t know how long hot food would stay hot during pick-up and delivery. Pay online, and a map pops up showing you where the delivery driver is, and how long before they get to 1) the eatery, and 2) you. I suppose one of the earliest food deliveries in the Bible is Genesis 22. Abraham is about to sacr
Read more

29 December
Our new pad has an electrically operated gate for our cars to come in and out (to our electrically operated garage, which is being used for storing assorted unopened and part-opened boxes for the time being.) The pedestrian gate opener is obstructed (on purpose, for security reasons) by a padlock. So how do parcel deliverers, meter readers and bearers of mulled wine (thankyou Robin   😊 ) gain ingress? Well, they press the groovy wi-fi connected camera doorbell which rings my and Leisa’s iPhone, wherever we might be in the world, displays their pic and allows one or both of us to tell them that we’ll be right down (if the dog is safely in) or ignore them if we’re in Woop Woop so that they can leave goodies at North Ward or JCU PO. Except it’s not connected yet. Give me a day or two to understand the accompanying installation instructions. Two well-known instances in scripture of Jesus, as it were, pressing the doorbell, are in Revelation 3: “Behold I stand at the door and knock.” And
Read more